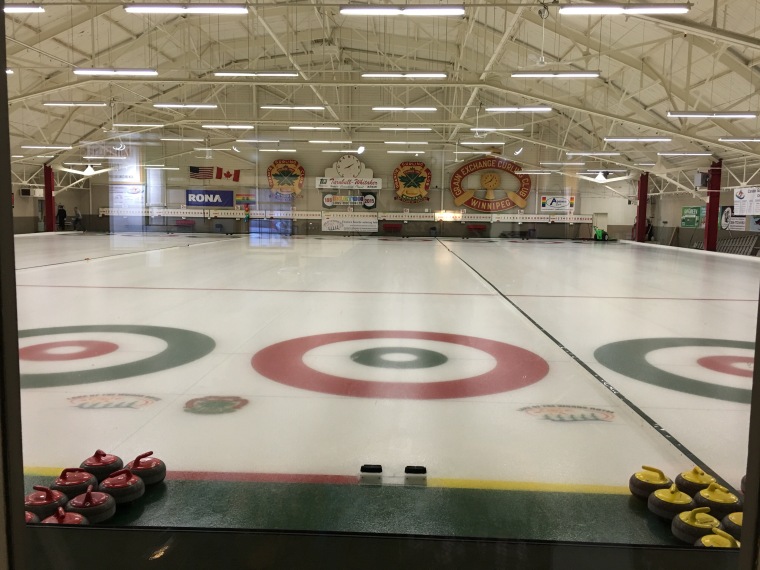 Ok babes, things are about to get prairie as fuck. Cause y’all I just spent the weekend at the Bison Cup; curling like the righteous fat babe athlete that I am. For those in the know the Bison Cup is the gayest goddamn bonspiel on the prairie. The fruitiest and most talented of gay curlers gather from across the country to curl and get laid. With varrying degrees of success on both counts. And once a year I dust off the old broom and grace the gay curling league with my fat queer presence. And my bang on sportsing fashion sense. Because what I lack in skill I make up for in hotness, and really isn’t that what athleticism is all about?

So, as a ‘naturally athletic’ and fabulous fat babe I can tell you that there is no other fattie at this bonspiel throwing rocks in a leopard print mini skirt. That is some next level sportsing, babes.

Now before we go on i need to tell all of you about the game of curling. Don’t be deceived by the fact that you can order beer down to the rink while playing or the fact that there are tiny ashtrays in the benches at either end of the ice- those things are simply a distraction from the dirty truth of the matter. This game is motherfucking hard. The fact is whether you are drunk and chain smoking or not, you have to lunge like way more than once, and you are on ice, and shit is really slippery.

And actually, I have maybe curled a handful of times in my whole life. Whatever.
I started at the bonspiel in 2015. Miy team was called Maggie’s First Time. Here we are last year:

just when you think gay curling can’t get any gayer- it totally fucking does.

My team thinks I have now played enough times that next year we can be Maggie’s Been Around. Which I certainly have.

So although I am certain that all you fat babes want in on the minutia of every single point we made in the whole tournament- the truth is I am still pretty unclear about how one actually scores a point, so instead you are just gonna get game highlights and by highlights I mean pictures of what I am wearing.

Gay curling looks a lot like regular curling except with drag queens and teams that dress up every year (this year ‘Friends of Dorothy’ and ‘the Golden Girls’ were the stand out teams for costumes- ‘Sophia’ curled with a tiny silver purse around his wrist all weekend which is a difficult task even for the most athletic of babes).
Friday I met up with my team after work-they had already curled once that morning and won so they were feeling pretty good and I was looking pretty good so we were basically ready.

We played a team called ‘mamas boys’ who were from Toronto and Winnipeg. The only way Kevin could get his mom to agree to play was if they let her skip- hence the name. She was a two time provincial champ so the Toronto gays were more than happy to have her top them all over the ice. And in turn they crushed us thoroughly. Now here is the most charming thing about curling- whoever wins buys the losing team a round of drinks. Basically even if you lose you win. So we spent the rest of the night watching curling and hanging out with this charming team. Here’s me wearing the most fetching little beer jacket: 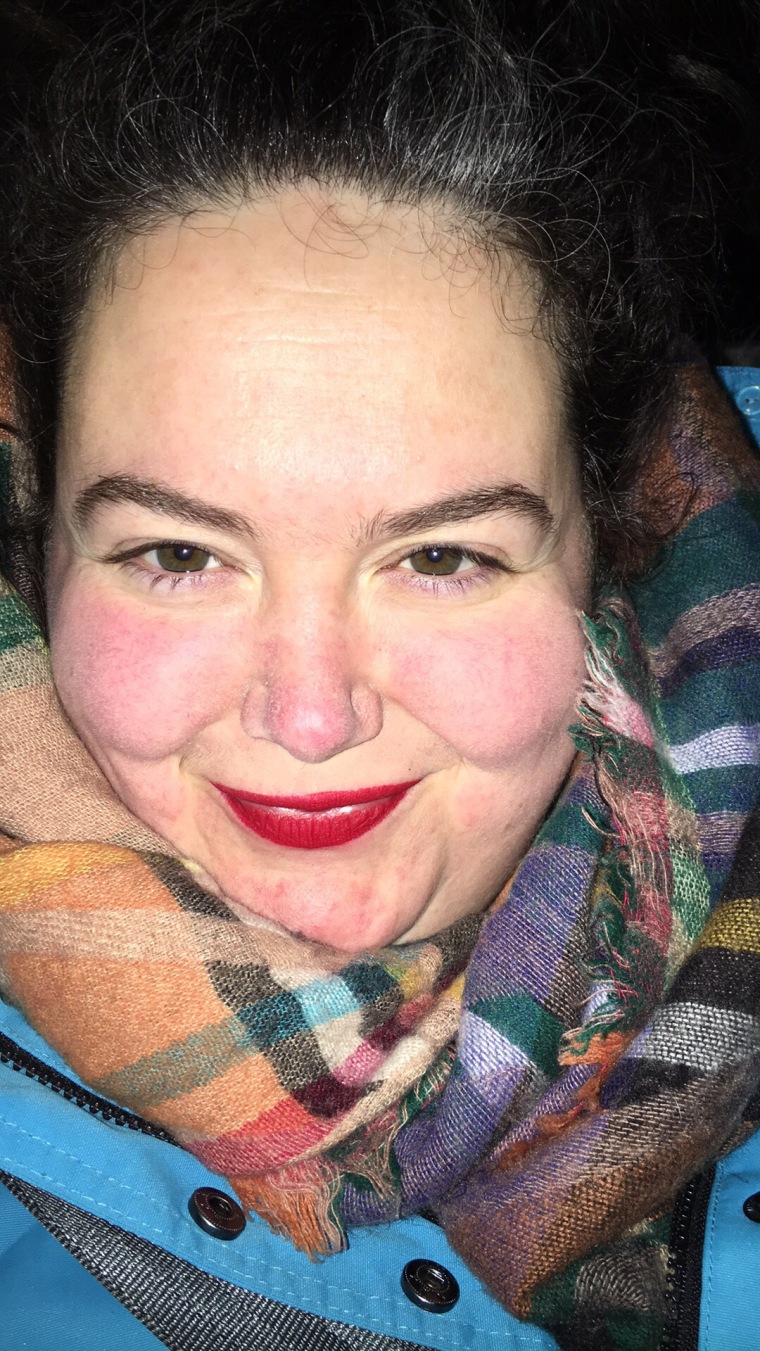 Next day we played at 830am. Fortified with Macdonalds breakfast we were ready.

This is me in my sportsing dress and shades (cause everything was too bright).

This is my full curling ensemble complete with yellow headband and curling shoes.

I need to pause for a moment and encourage all of you to just look at that curling rink bathroom keeping it classy with a wall of mirror and a vase of silk flowers. It’s the prairie and there is no irony at the curling rink. This shit is for real.

Ok, the shoes.  I am overjoyed at having those black curling shoes cause I have been ruling the rink over the past year in these beauties:

Those are some 1970’s curling shoes that my skip bought at a garage sale for two bucks. #prairiebargain

Along with this beauty: 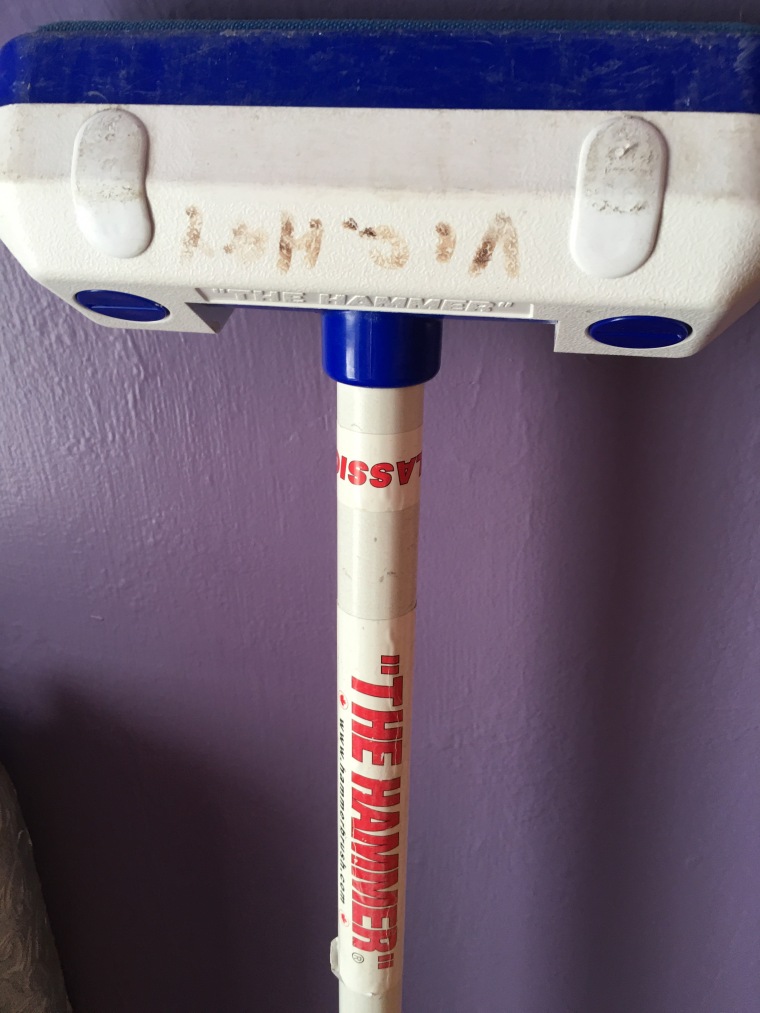 Known as ‘the hammer’ this broom and those white shoes have been my curling gear for the past year. This year my fat babe vanity got the better of me and I retired the shoes. To be clear, curling fashion is basically an oxymoron but at least I now look less like a throwback to a bygone era, y’know?

We played a couple of games on Saturday and we almost won one of em! And i managed to keep both of my rocks in play on one end! So proud.

As a ‘natural athlete’, my sportsmanship is exceptional so we had a ton of fun with our opponents anyways.

Here is me being serious about curling:

oh and did I mention I use this little slider cause otherwise I can’t get up on the ice? Fat babe adaptation for the win. So sportsy.

Then we were done for the day. One Epsom bath later it was time to get ready for the banquet. Here is what I ended up with: 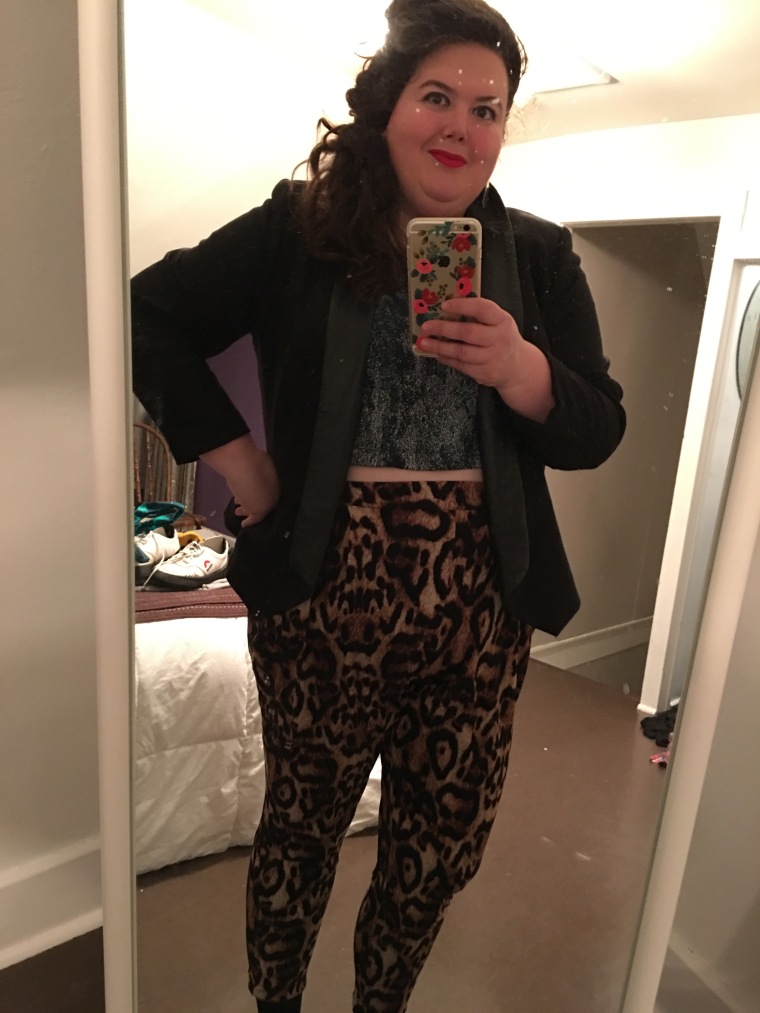 Why yes that is a green sparkly crop top with my leopard pants and DKNY jacket. My eyes may be wild and, shall we say, eccentric, but my curling game is on fleek, as the kids say.
Here are some banquet shots:

Mike is the second and he wears his kilt curling. This gives me life.

My skip looks fab, but all she cares about is that this dress has pockets. Her priorities may be off, but she is soaring to epic fat babe status here.

Rob is our third, so handsome in his floral shirt and neck scarf.

We may have lost at curling, but we won at babeliness.

All in all the weekend was most definitely a gay old time. Homo curling, who knew it was a thing, and who knew all they needed was a fat babe curling in mini skirts to bring out the natural athlete in all of us.

So babes I’m a gym rat. I go nearly everyday. I elliptical mostly, but I also try to do a circuit once a week and I mix it up with the stationary bike. Surprise, I’m still fat-the fattest I have ever been. Can we all take a moment to let the fact that a solid fat babe like me goes to the gym everyday sink in. 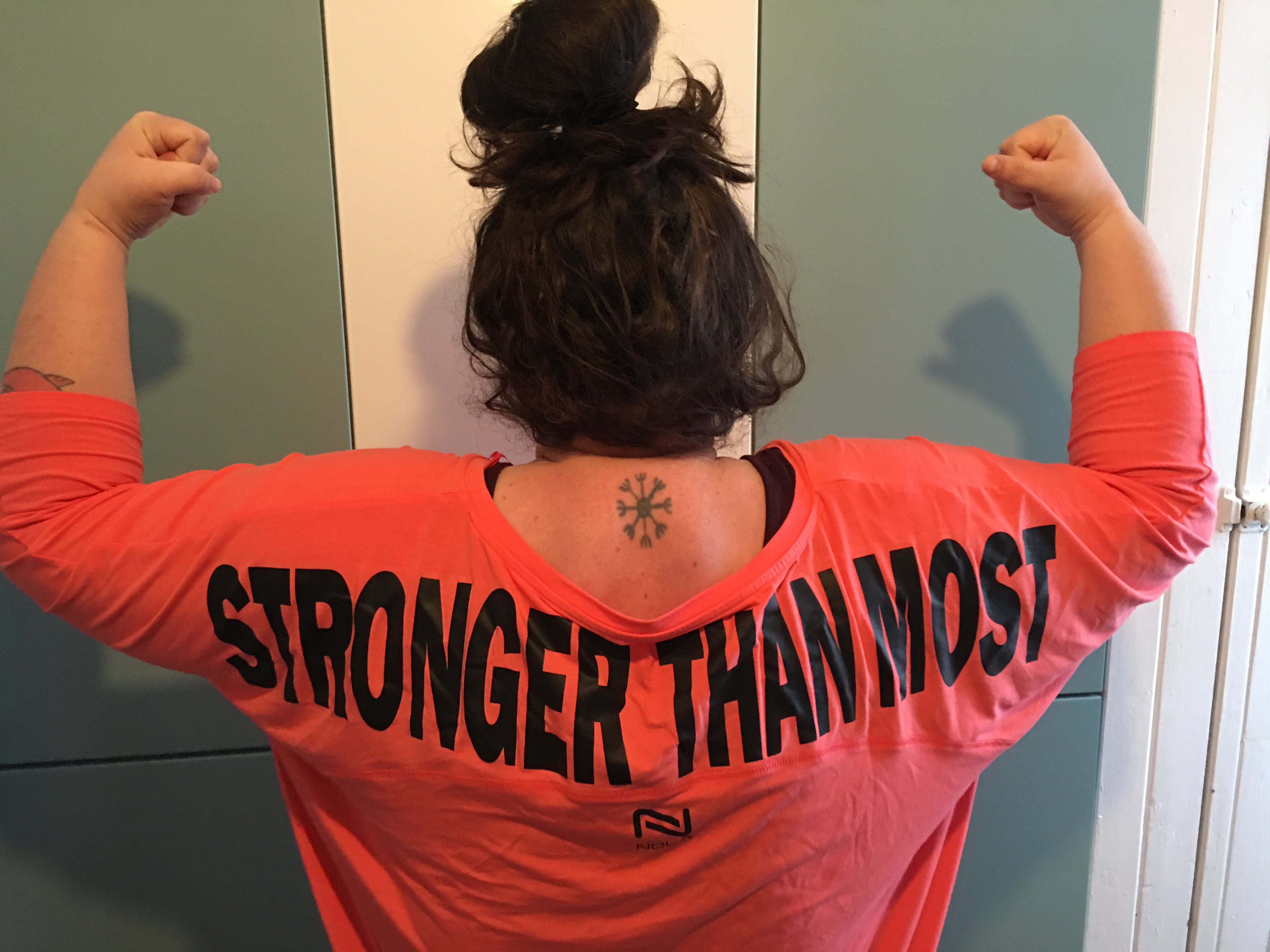 Now, if there was ever a place a fat babe needs armour it is at the gym which is like a honing beacon for body dysmorphic dieters- I just don’t have the heart to tell them that exercise doesn’t make you thin. Not begrudging the skinnies their hangout- it’s cool you are welcome in my gym. Just stop looking surprised to see me here. And I’m not fucking leaving so get into my sweaty fat face already. I stake my ground at the gym because y’all we have a right to be here (if we want) and also because it has become a place that makes me feel really good. 45 minutes out of the day that are gloriously mine and where people aren’t all wanting a piece of me. Fat babes need breaks from the world too and for me I have randomly found it in the gym. Weird.

I love the gym for the following reasons:

1. It keeps my crazy at bay. My near daily gym regimen over the past year has been the single greatest intervention for managing my anxiety-and I have tried a lot of stuff.

2. There is cable tv at the gym. I am obsessed with television to the point where I can’t have it in my home or I would never do anything else. So learning that I can watch reruns of Modern Family (which I know is problematic in nearly every way possible, but hey still funny so what evs) while working out was a goddamn revelation.

3. I have a semi legitimate reason to buy active wear. And I only need semi legitimacy to buy clothes. Let me show you what has me all excited these days:

On me: This slouchy top makes me feel like I’m in Fame. I may break into dance at.any.moment.

Those are turquoise and black stripes.Reversible. Here is the pattern on the other side:

Apparently it’s a bra, but I’m pretty sure it’s a top. Additionelle, we can agree to disagree.

Anyhow, I got these after getting a gajillion gift certificates after buying a winter coat. The lace top (from a previous post), two of these bra things, and the peach shirt cost me 50 bucks total. All these things were regular price so in my opinion overpriced. I don’t believe you should ever pay full price for clothes and additionelle is no exception. Holding out for the buy one get two free or at least a 40%off sale is the way to go.

K, babes a quick caveat: I spent the bulk of this year wearing the same pair of leopard print leggings and tank top to the gym every damn day. And I only just replaced my old hospital nurse runners with a pair that don’t have blood and superbugs all over em. You don’t need activewear to be active- I am just a ridiculous clothes horse who will jump on any excuse to buy shit I don’t need. And well, this is a shameless fashion blog so y’know, grain of salt and all that.

Anyways fat babes, let’s keep taking up space and if you wanna come to my gym with me, I’m down for that, just don’t interrupt me during Ellen.